The photo on the left below was taken while tramping to the Coromandel Pinnacles in November 2005. The photo on the right was taken earlier this week while hiking The Cost Track in Royal National Park. In addition to the same pack, I realised when putting these two photos together that I have the same hat as well. 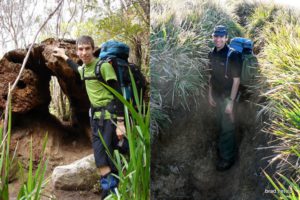 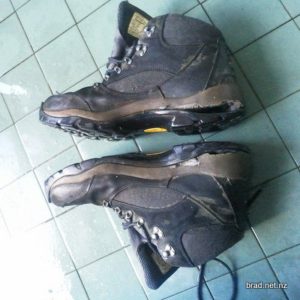 When I went to clean my hiking boots after my last hike I discovered large holes in the soles of both boots, therefore ending the life of a pair of boots that have lasted me over nine years. END_OF_DOCUMENT_TOKEN_TO_BE_REPLACED

This year I have decided to make all my goals actually tangible and measurable.

They are, in no particular order:

At the start of this year, as always, I set myself a set of goals, some of them in review:

During the past year I haven’t done any hiking, and there have been fewer adventures. Having said that I have still done a fair amount of fun things around Sydney during the year:

END_OF_DOCUMENT_TOKEN_TO_BE_REPLACED

In no particular order:

Unlike 2010 I spent a lot less time travelling, however, this was made up by attending a lot more events, activities and hiking around Sydney:

END_OF_DOCUMENT_TOKEN_TO_BE_REPLACED

I have now been in Sydney for 11 days and every night I have planned to blog about the first few days here and every day I have been too tired or too busy. Tonight I am in the too tired camp but have decided to force myself to give an update and get over and done with it.

I arrived in Sydney two Saturdays ago at 8.30 in the morning, after leaving Auckland at 7am (which meant a 3am get up time for the flight). We arrived into Sydney at the same time as about 10 other flights which meant it was chaos trying to get our bags and get through customs. In the end it took close to an hour and a half to get out and into the rental car hire queue. The rental car I got was a 2009 Toyota Corolla and by far the smoothest and nicest car I have ever driven.

The first few days in Sydney were spent getting my new flat/apartment set up. It is amazing how much money you can spend in just getting the basics – like food, cooking equipment, and basic furniture. In between all this chaos I also managed to do a few things that got me to see a bit of my new home these included:

The second part of my first week here was spent sorting out things like insurance and the like. The most interesting part of this was sorting out Medicare where I had to make a signed legal declaration that I had moved from NZ for good and was living in Australia for the next few years – the guy at the office didn’t seem to believe me even though I had all my uni forms with me! Thought I was some crazy kid on holiday. I also managed to get a cellphone and internet set up. After terrible customer service from Optus I went to Vodafone who set me up with this awesome mobile broadband USB stick which is faster than my old wired broadband in NZ. Although a much smaller data cap so I have to take care about how much data I use.

My second weekend in Sydney was spent having fun in the rain as some of the heaviest rainfall in years hit the city. On Saturday I went out to Bondi Junction shopping mall. Bondi Junction is massive. Imagine the Albany Mall and times it by 2 just for the ground floor, and then make it seven stories high. There is something like 450 shops in the mall. And you know what. I walked through the entire mall and only went into 2 of them! They were nearly all clothes shops – the last thing I need when I am trying to get set up for uni on a budget. On the Sunday I decided to look through town and found this most amazing hobby store in the QVB mall called Hobbyco.

Monday and today was spent at Uni. There is nothing that exciting to report here about my course – Mostly what I was expecting with a few minor hiccups around enrolment. What is amazing though is the size of the campus. Having come from Massey Albany with only around 6000 – 7000 students it is so weird to be on campus with close to 50,000. There is a sign at the front gate that welcomes the 9,000 new first year students! Almost twice the numbers of the entire Massey Albany campus.

The one thing that I will get sick of very quickly, and already am, is having to catch the bus to campus. I have not had to use public transport in years and while the Sydney transport network is far better than Auckland – I love the underground trains, the buses remain as noisy, as crowded, as bumpy, as slow, and as annoying as ever. Given that I have no plans, or money for a car for around a year I guess it is something that I am going to get used to – I just wish there was a train to campus rather than a bus!

P.S. I may have used to complain about the humidity during summer in Auckland but it is nothing compared to heat here. Last night was 25c overnight it makes it so hard to sleep!

I have arrived in Sydney and getting set up before starting university next week.

After four days of being in the 90s (aka the stone age) I now have a mobile phone and mobile broadband internet – it is quick too: 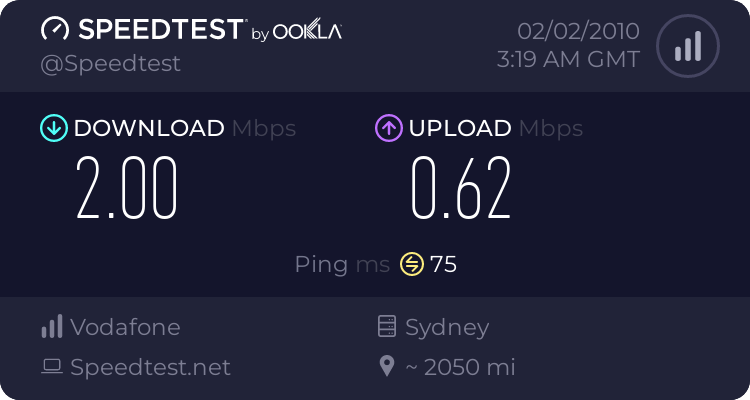 I have many photos to sort through and put online at some point as well as that a much larger blog to write detailing the first few days of my new life. In the meantime I will leave you to wonder how I managed to drive 600km in a rental car in 3 days without leaving Sydney.

This was my “Control Centre”, aka my computer setup in 2008

END_OF_DOCUMENT_TOKEN_TO_BE_REPLACED

Back at the start of the year I listed my goals for this past year, well here they are reviewed.